Maggie Tang, W’22, is avidly pursuing her interest in hospitality at Wharton, from starting a food podcast to writing honors theses on fostering creativity and positive culture in high-end restaurants.

Maggie Tang, W’22, came to Wharton with a clear goal: she wanted to work in the food and hospitality industry.

“I went to a boarding school located on 3,000 acres of wilderness,” she said. “We chopped our own wood, lived in cabins, and had a farm where we grew 70 percent of all the food we ate. I was super involved in my school’s farm-to-table kitchen and would help make the meals three to four times a week, for 120 people.”

During her senior year of high school, she wrote her thesis on fine dining. “I knew nothing about the industry, but wanted to learn more. I cold-emailed a bunch of restaurants and the one that got back to me was Atelier Crenn, a two Michelin star restaurant at the time, and so I went to cook there as a part of my thesis. I absolutely loved it.”

Since coming to Wharton, Maggie has made the most of her undergrad experience by pairing her passion for the hospitality industry with a business education, from clubs to internships to creating a food podcast during COVID.

Maggie joined the Wharton Undergraduate Hospitality and Travel Club her freshman fall, which helped her explore the industry further outside of the classroom.

“Through the club, I was able to organize events and meet different people in hospitality. Last year I organized a trek to New York City, where we went to Eleven Madison Park and The Aviary,” Maggie said. She eventually became Co-President of the club her junior year.

Maggie also leveraged the Penn and Wharton network to connect with alumni that worked in the restaurant industry, which helped her land a summer job as an operations intern at Eleven Madison Park, the number one restaurant in the world in 2017, during her freshman summer.

“It was a really awesome opportunity to learn about front-of-house operations and what hospitality means at the best restaurant in the world,” she said. Since then, she has continued to intern at various restaurants, including Commis, Saison, and Boka Restaurant.

This year, Maggie is writing two theses on the fine dining industry. One is with Wharton Research Scholars, a program that connects juniors and seniors with Wharton faculty to write on a thesis topic of their choice. Alongside Prof. Greg Urban and Prof. Sigal Barsade, Maggie is researching management and emotional culture in restaurants, as well as how to train the next generation of leaders in the industry.

“Historically, a fear-driven culture was celebrated by the media with shows like Hell’s Kitchen,” Maggie said. “If you say, ‘If you don’t cook the fish right, you’re fired’, it’s going to make sure the person really wants to cook the fish right. How do you change the management culture in restaurants? What’s going to incentivize people to want to change?”

After interviewing 30 of the world’s leading chefs and hospitality leaders, Maggie was inspired to combat this culture of fear by creating training courses for chefs, led by Wharton faculty.

“Chefs go into restaurants to cook and they get promoted, not because they can be a good manager, but because they’re good at what they do. I want to create management courses with Wharton professors that educate and increase transparency in the industry so people can celebrate cultures of love,” she said.

Maggie is also doing an independent study with Prof. Angela Duckworth and writing a second thesis on how creativity is fostered in high-end restaurants.

“A lot of your job as a cook, a lower level position, is doing the same tasks every day. But when you get promoted to sous-chef, you’re required to start creating dishes,” Maggie said. “We were interested in how people from routinized backgrounds become creative in some of the most innovative places in the world. I found that kitchens can foster creative cooks by offering them opportunities to be creative.”

During the pandemic, Maggie teamed up with fellow Penn Apetit Board member Alaina Chou, C’22, to launch Gourmand.

“I wanted to start Gourmand as a podcast to inspire other students to pursue careers in the restaurant industry and create a community for students who are interested in food and hospitality to empower each other and talk about some of the most pressing issues that are happening in the industry, such as sustainability, mental health, and COVID,” Maggie said.

Over the past few months, Gourmand has expanded to five other university branches and has collaborated with other organizations, including Penn’s Class of 2022 Class Board, to host events such as a hummus demo with Michael Solomonov of Zahav Restaurant in Philly. Additionally, Gourmand partnered with nonprofit Women in Hospitality United to host Hindsight 2021: What I Wish I’d Known, a two-day conference focused on bridging the generational gap between industry leaders and the next generation of women in the industry.

“At its essence, hospitality is about taking care of people, being thoughtful, and making people feel welcome. Working in an industry where that is everyone’s passion is super rewarding, and that’s the piece I love most about it,” Maggie said. 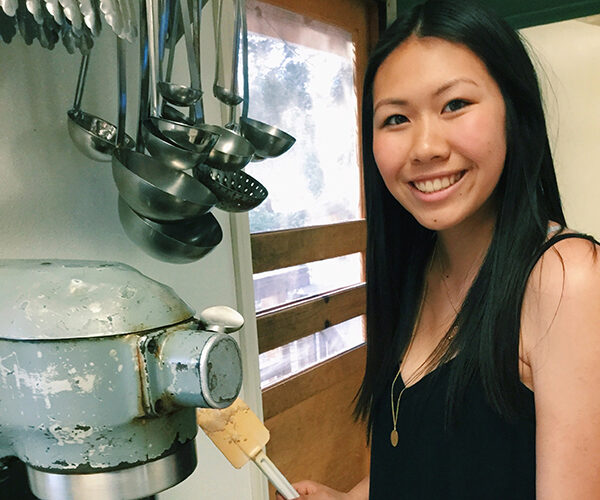